Mold or commonly known as black mold is one of the many issues that homeowners can come across. But, unlike other types of home problems, mold can cause real health issues and lower the value of your property. That’s why it’s vital to get rid of it as soon as possible.

However, you can’t do that without knowing what mold looks like. And since fungi come in all shapes and sizes, sometimes you might confuse them for mildew or yeast. So, let’s take a deeper look at mold and figure out what makes it unique and how to recognize it.

Generally, mold is a fungus that develops in multicellular structures called hyphae. Those structures grow and eventually multiply into visible colonies, which experts consider separate living organisms. Similar fungi that you can come across include mildew, mushrooms, and yeast.

Mold plays a vital role in nature. More specifically, it speeds up the natural decomposition process by breaking down organic matter like wood, plant debris, and leaves. However, when infesting a home, mold can cause respiratory problems. This is mostly the case for people who are already suffering from asthma or similar health issues. 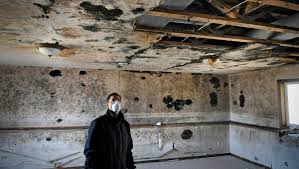 How to Recognize Mold?

If you are a homeowner, you might already know what mold looks like. But if you don’t, there are a few ways you can easily recognize it:

You might be familiar with green and white molds, as those are commonly found on spoiled food. Or, if you’ve dealt with infestations, you surely have seen the infamous black mold that every expert talks about. But mold can also be gray, tan, brown, red, blue, yellow, or any other color combination. In other words, mold comes in a rainbow of colors, with some being more dangerous than others.

Like its color, the mold’s textures vary greatly. Some appear soft and velvety, while others are fluffy, grainy, slimy, or spongy. For example, black mold looks like someone spray-painted the wall with leopard-like spots that get bigger as the fungus grows. So don’t assume that a fungus is not mold just because it doesn’t feature the traditional fuzzy texture.

Usually, people assume that mold has a musty, lingering, and extremely pungent odor. Yet, for some, mold features an earthy, meaty smell or an odor that resembles wet carpeting or rotten wood. As a result, it’s clear that mold can have all sorts of odors, depending on its environment.

But why does it smell so bad? That’s because mold emits MVOCs or microbial volatile organic compounds. These gasses are released throughout the mold’s growth cycle. And while they are usually harmless, some of these chemicals can cause health problems for humans and animals alike. 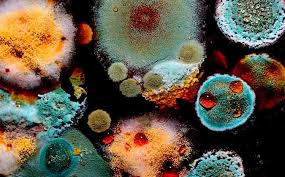 Get Rid of Mold Today!

Unfortunately, mold infestations are incredibly common. But, if mold hasn’t taken over more than 10 square feet of a room, you can handle it yourself by using special cleaning substances or DIY methods like vinegar and baking soda. However, if the infestation is much more serious, you’ll need to rely on a professional mold remediation company.

Here at Titan Environmental, we use cutting-edge equipment to get rid of mold infestations, regardless of their size and severity. That way, you won’t have to deal with the dangers of getting in contact with mold. And since mold can always come back, we also use a special coating that drastically reduces the chances of further growth.

Call Titan, your local mold testing & removal Kansas City experts today at 913-432-5500 to get answers to all these questions or schedule testing or an appointment for a free estimate. Let Titan’s team of restoration professionals return your indoor space to a healthy and happy place!